With 80,000 students expected to scramble for student accommodation during clearing later this week, StudentTenant.com have investigated the cheapest University cities to live in the UK.

Latest research revealed that students studying at the University of Sunderland are saving as much as £2,455.46 per year on student accommodation, compared to the national average.

The research analysed the weekly rent of over one hundred university towns and cities across the UK to find the most affordable places to live and study. To determine which cities were the most affordable, StudentTenant.com analysed property booking and available property data for the 2019/2020 academic year. The average yearly rent across the UK is £5,353.03 per annum. 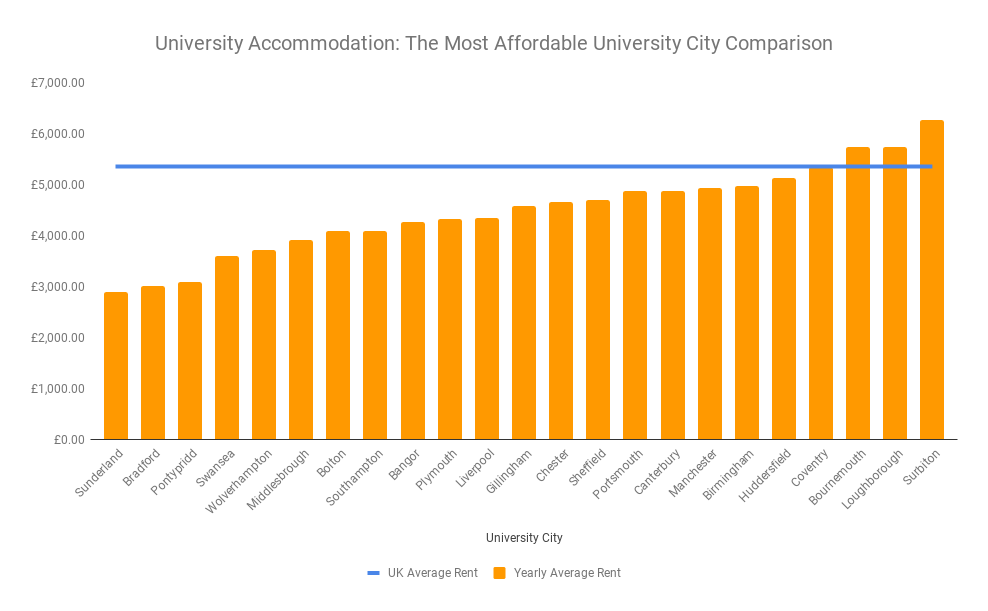 Despite ranking 63rd out of 131 universities in the UK, the University of Bradford is the second cheapest place for students to live in the UK. With an annual average rent of £3,008, students in Bradford are saving as much as £2,344 per year compared to the national average.

The third cheapest place to live whilst studying in the UK is Pontypridd. Students studying at the University of South Wales are spending £3,078 on rent per year on student accommodation, saving around £2,274 per year.

Despite ranking among the top 100 universities globally, being a founding member of the prestigious Russell Group and home to over 25,000 students, Southampton is within the top ten cheapest cities for student accommodation in the UK.

Our research shows that the city of Southampton offers the most bang for your buck when it comes to education, with accommodation prices averaging at £4,093.20 per year, with savings of £1,259.83 per year compared to the national average.

“With the cost of living for students on the constant rise, and the threat of landlords increasing rents to offset costs due to the tenant fee ban and other legislative changes, it’s good to see that there are still certain areas in the UK which offer affordable student accommodation.

Unfortunately, it seems that there are still many cities across the UK that are financially out of reach for some students, which could lead to talented individuals having to sacrifice places at top universities because of high rental prices. This should be addressed!

University fees have risen significantly over the years. We would suggest that those prestigious universities with places they would like to fill with talented young people (particularly during clearing), should consider subsidising rents for students who might not have the family financial support of others.”

Or login with your details